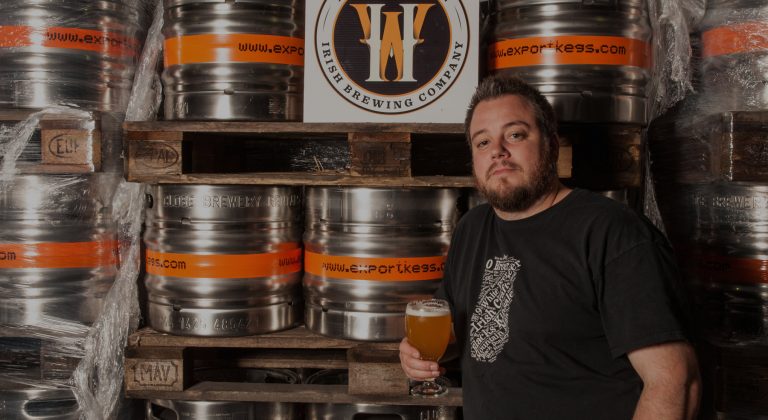 A Visit to the White Hag Irish microbrewery in Sligo

With the kids safely dropped off at the crèche, my husband Enda and I headed north on a day trip from Ennis to Sligo to visit the White Hag Irish microbrewery in Ballymote in Sligo.  We had met James, one of the founders at the Doolin Craft Beer Festival in August and he invited us up to see what they were doing.  Little did he know, we would take him up on his offer.  Michael drove from Dublin and we arranged to meet in the Coach House Hotel before going out to the brewery together.

It’s over two hours from Ennis to Ballymote and around about Tuam, we lost Clare FM.  We switched over to Ray D’Arcy on Today FM and as fate would have it, Ray was interviewing Adrian Sheerin from the Meatin Place in Ballymote.  Adrian was inducted into some French secret sausage society due to the outstanding and multi award winning sausages he produces.    Enda and I both agreed that we definitely would have to stop in to see Adrian on our visit to Ballymote!!

We continued our journey through the winding Irish back roads to Ballymote, picked up Michael and found the White Hag Brewery in the quiet industrial estate on the outskirts of town.  Luckily the kind people at the Coach House Hotel knew where it was as we would still be circling Ballymote looking for the microbrewery but for them!!

As you may have already read from the blog post entitled A Trip to Bury, Michael and Enda completed a week long brewing course in Bury in England as it was intended that they would be the brewers for our Irish microbrewery when we eventually opened.  As we walked into the microbrewery I turned to them and asked them if they would even know where to start at which point they both looked at each other and shook their heads simultaneously!  It was at this point we decided to hire a brewer!!

Joe, the brewer master at White Hag was our guide for the afternoon and he could not have been more helpful and informative.

He showed us around the microbrewery explaining the equipment and how it worked. He very graciously pointed out the problems they had with their equipment and what he would have done differently had he been involved from the start.  A lot of money was spent on the brewery initially and unfortunately, a lot more had to be spent on it to make it fit for purpose.

Joe moved to Ireland with his wife and two kids from the US to take up the position of head brewer.  He had never been to Ireland before he accepted the job but he and his family have settled into life in Sligo and were delighted with the move.  We asked him about missing home but coincidentally, he said whenever he gets homesick a quick visit to Sheerin’s butchers for their Italian sausage sorts him out.  If we weren’t convinced before, we definitely were sold on a trip to Sheerin’s after Joe’s glowing recommendation.

Joe showed us their new bottling machine which he customised himself for greater efficiency.  Bottling is the least popular job in most microbreweries and Joe’s alterations made their job a little more bearable.

White Hag had only really launched at the time of our visit.  Doolin was their first real outing quickly followed by an extremely successful appearance at the Irish Craft Beer Festival at September.  Their Irish Heather Ale was a clear winner that weekend.

After we bid Joe farewell and thanked him profusely for his time, we went back into the Coach House to regroup and get some lunch along with a glass of White Hag which was available on draft.  Following that trip we decided to start the search for a master brewer and to get his input in the brewery design, a decision that has paid dividends!!

Before leaving Ballymote, we just had to call in to see Adrian.  Unfortunately Tuesday afternoon is when he makes his world famous sausages so the selection on offer was pretty limited.  We took a sample of everything he had left which included his sundried tomato and basil sausages and his black pudding sausages.  Joe had clearly got there before us as he was completely sold out of Italian sausage!!  Adrian very kindly threw in a few breakfast sausages for the kids when he heard we had come all the way from Ennis for his sausages!!

All in all, the trip to Ballymote had proven to be a very productive and eye opening day.  It was a great reality check and we are extremely grateful to Joe for spending the afternoon with us at his Irish microbrewery and showing us how he creates some of the finest craft beer Ireland has to offer.